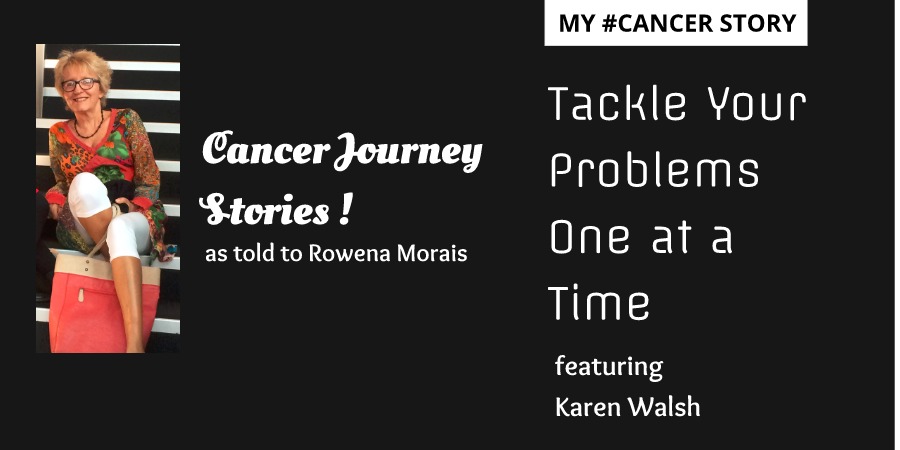 This is a series of #cancer stories I am writing to raise money for cancer research so that the vital work that needs to be done in cures and therapies may continue. In this series, I interview others who have or are still battling cancer in order to share their story, to empower and uplift. If you would like to share your story, donate any amount, help spread this message or want to find out more, you can visit my Indiegogo charity campaign site. This is a six month campaign that began in October 2018. All proceeds raised go directly to Cancer Research Malaysia. Thank you very much for reading.

This is Karen Walsh’s story.

Hello, my name is Karen Walsh. I am a mother of two girls, aged 9 and 16. Based in Brisbane, Australia, I am a computer programmer and web designer working from home.

In late 2010, at the age of 45, I found a lump in the lymph nodes under my left arm. From various biopsies, it was determined to be a secondary cancer i.e. not from the lymph nodes itself. Everyone thought it was breast cancer but none could be found through any form of imaging. The breast surgeon was sure that when they had the whole lump that pathology would find the primary cancer. Alas, it was not the case and I underwent another eight weeks of tests to find the primary cancer, anxiously awaiting my doom.

The surgeon advised me to stop breast-feeding my eleven-month old daughter, at the time, in preparation for treatment. This was a big stress factor for me as cuddling and her breast-feeding was a comfort to me as was knowing that she was being given human milk. My daughter was allergic to dairy products and putting her on soy formula was not advised. We did that anyway because there were few other options available and eventually, we devised a nutritious home-made formula.

Most people around me thought I was going to die.

Eventually, after finding no evidence of a primary cancer, 16 out of 17 doctors voted for breast cancer. This was a big relief as breast cancer was often curable and a cancer of unknown origin was not.  Nevertheless, I was suspicious that it could have been something else.

I became fairly well known around the Oncology and Breast Care Units at Cairns Base Hospital. Bringing my note book with a list of questions to each doctor’s appointment was apparently not very common then. This appears to be changing now.

I was first treated with six rounds of chemotherapy along with a raft of nutrients that I researched to try and prevent the worst side effects of the chemo. Chemo was administered every three weeks. One of the oncologists told me that the first two weeks were for the drugs to take effect and the last week was for recovery. I took a lot of supplements in that last week.

Radiation came next.  I didn’t really do anything to prevent side effects other than spray aloe vera juice on the burns.

As far as I am aware, I have not had any lasting side effects from the chemo or surgery. Lymphoedema is common in people with lymph node clearances which is what I had. Exercise and diet seem to have kept it under control. Or perhaps I am just lucky? Radiation is a whole other story.

I am a happier and healthier person. This scare gave me a kick up the pants regarding my health. It gave me a very keen interest in nutrition and made me exercise more regularly than before.

Cancer spurred me to create a piece of software that I dubbed Vitamin Inspector. Vitamin-inspector.com cleverly compares the contents of complex multi-vitamins nutritionally. It is the only software that can do this. It can even compare ingredients that are not the same but used for similar purposes nutritionally.  You can read the story here: The Origins of Vitamin Inspector.  Spending a year or two researching 300 nutrients has given me quite a lot of knowledge on the subject of nutrition.

Divorce. This should have happened anyway but the cancer gave me the impetus to leave a very unhappy relationship and start living my life properly.  This led to moving cities, from Cairns to Brisbane.  The children have had times when they live with their father or with me or alternate between us.

My enjoyment of outdoor pursuits has increased immensely. Walking and cycling are my most common modes of transport.

Sailing has become an important although not very frequent part of my life now. When the kids were with their dad, I managed to sail the Australian East Coast a few times and over to New Caledonia.

I am often told I look ten years younger than my age. I did look at least my age before cancer.

My memory is worse. I rely heavily on the notes on my phone to organise my life.  What caused this memory loss is still a little blurred as I had baby brain, then chemo and now I am getting older, over 50. It is most likely a combination of things but stress makes it worse. My memory seems best when I am healthy and taking curcumin supplements and in non-stressful life situations.

I have had repercussions from the radiation to my left breast and shoulder. Bursitis was diagnosed which looked like a general degradation of the muscles and tendons in and around the shoulder under ultrasound. The GP I saw was adamant that this had nothing to do with radiation but I disagree and so does my physiotherapist.

Why would my left shoulder deteriorate and my right shoulder (that had no radiation) be fine otherwise? There is no other plausible explanation.  Anyway, all is good as long as I keep the muscles around my shoulder strong by doing fairly regular targeted exercises.

What’s remained the same for me

Relationships with my family and most friends have remained strong over this period.

What I’ve learnt from the entire experience

Take responsibility for your own and your family’s health.
Question doctors. Most of my doctors were great but not all.
Read labels. Don’t put any reliance on advertising.
Research health issues.

Advice about dealing with cancer for others on a similar journey

Don’t get stressed about the results of medical tests. It’s a big waste of time. It helps me to remember my cousin’s axiom “Guilty until proven innocent”.

During my diagnosis and then through all the follow ups since, I have had many, many worrying results from medical tests. There was even another unrelated cancer diagnosed. There ensued three months of still more worrying. The pathology after surgery showed it to be a very non-invasive, non-aggressive cancer and no harsh treatment was recommended. Having had so many ‘open-ended’ results over the years, I rarely give them much thought now until something is certain.

Do your own research and question doctors. Don’t necessarily self-medicate like I did. Consider it after researching its safety and efficacy. Make sure you understand it very well if you do.

To give yourself the best chance of survival, read Jane McClelland’s amazing new book “How to Starve Cancer… without starving yourself“.

Those who take responsibility for their health have better outcomes than those who just follow what the doctor says. If you are uncomfortable with a treatment, say something and make sure it feels right before going ahead or continuing. This applies as much to long term treatment as a surgical dressing change. This can also help to avoid medical errors.

A cancer diagnosis can be completely overwhelming. There are so many aspects of our lives that are affected. Try to tackle things one problem at a time.

Is there anything I would have done differently regarding this journey? I wish I had been less scared and less negative in the beginning. It is easy to get carried away with ‘what if scenarios’ that never eventuate. Right now, my philosophy is quite simple – make the most of a bad situation. Almost any horrible situation has a silver lining if you allow yourself to change because of it. That is, of course, as long as one survives. Don’t spend your life only working. Enjoying life now is important as nothing is guaranteed.

After initially going downhill mentally quite rapidly, I recovered somewhat by focusing on research. It helped me to overcome fears and take some control of the situation. You can read more about my cancer treatment.

Karen Walsh is a software developer, health blogger and sailor. She is the creator of Vitamin Inspector. A problem solver, she works to make the complex simple. For more on Karen, please visit her website.

You can read other stories I have written in this series.