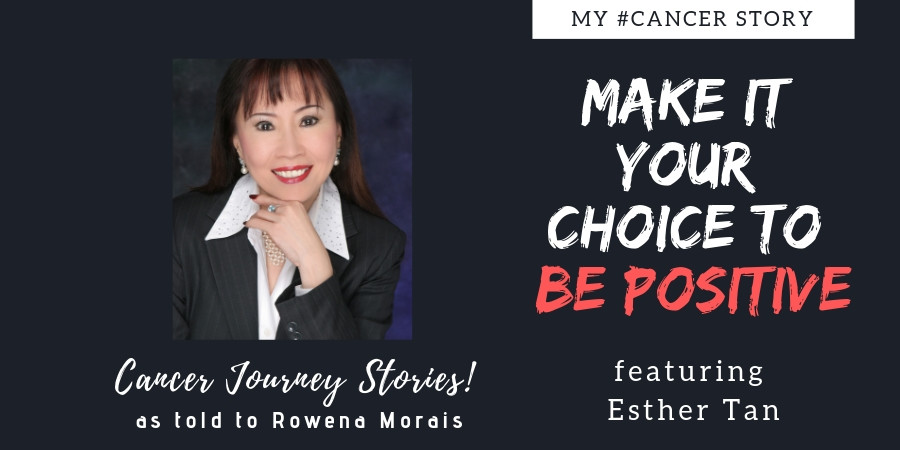 This is a series of #cancer stories I am writing to raise money for cancer research so that the vital work that needs to be done in cures and therapies may continue. In this series, I interview others who have or are still battling cancer in order to share their story, to empower and uplift. If you would like to share your story, donate any amount, help spread this message or want to find out more, you can visit my Indiegogo charity campaign site. This is a six month campaign that began in October 2018. All proceeds raised go directly to Cancer Research Malaysia. Thank you very much for reading.

This is Esther Tan’s story.

My name is Esther Tan and I am an auditor. On completing my studies in the UK many years ago, I qualified as an accountant with the Institute of Chartered Accountants, England and Wales. For many years, I’ve devoted time towards voluntary service. I am active in my Rotary Club of Pantai Valley, as Treasurer of my club. I am also Treasurer of the Resident Association where I live and am a Regional Director of the Asia Pacific region of AGN International.

I find it relaxing to dance and sing in my free time. In fact, I sing with a band to cheer senior citizens. I enjoy being able to regularly support these lovely people who travel down memory lane to the sounds of the golden favorites of yesteryear.

I was in my 30s at that point and going through a lot of stress  – I could not cope with it. It started with a mild fever which just would not go away. I saw several doctors who prescribed me lots of Panadol and I also went to the Chinese sinsehs who said that my body was just heaty.

This went on for some time.

Eventually, I saw a doctor who gave me a blood test. The test was done in the morning but by that very afternoon, the doctor called and told me to pack my bags immediately and get myself admitted to a hospital. His diagnosis –  it was likely I had leukemia.

It was a shock.

I did not accept this at all, I was in denial. But I got myself admitted into a hospital and that’s when it all began to unravel. As soon as I was admitted, it got much worse. The fever didn’t abate, persisting for seven hours!

For those seven hours, my fever was so high, I had hallucinations.  The hospital ran out of ice to help manage the fever. And then, over the next seven hours, I was freezing from the inside out, no amount of blankets could keep me warm.

Doctors were flabbergasted – they could not tell me what was wrong and discharged me saying that there was nothing they can do. But thanks to my uncle, Michael, I was flown to the Singapore General Hospital. I was wheel-chaired onto the plane and wheel-chaired down straight into an ambulance waiting.

There were 16 doctors who attended to me on that first day. It was beginning to get annoying –  I felt as though they were medical students using me as some sort of guinea pig. Later, I was informed they were all actually consultants from various departments who needed to give their own version of my predicament and condition.

It was a tough time being away from home. I was alone mostly. My son was then a mere six years old. To tell you the truth, 33 years ago, the tests that were being carried out were, I felt, a bit archaic and extremely painful.  Biopsies were done and forwarded to the US for examination.

Anyway, it was confirmed that I had Non Hodgkin’s Lymphoma. I had to either accept a very intensive regime of chemotherapy which would give me a 50 percent chance of survival or I would simply have six months left.  I opted for the former.

I began to read all I could about the different drugs in my chemotherapy regime and the side effects. I prayed hard that it would not be as drastic as what I was reading. Alas, every week I endured these horrors.  My hair began to drop, the ulcers in my mouth were getting from bad to worse. There was pain between my gums and teeth. Nausea was unbearable – I didn’t have any desire to eat and there were many, many sleepless nights.

My fingernails, armpits and my bottom turned black – this was a rare side effect that I had to undergo.

Finally, when the chemotherapy ended, the side effects began to subside. The worst part about this whole chemotherapy regime was a particular procedure I had to undergo. Doctors had to break off a piece of bone from my back and test it to see if there were any more cancer cells left in my body. That was the most excruciating pain I ever endured and unfortunately, it had to be done several times.

During this entire ordeal, many things changed in my life.

I began to have a greater appreciation of things and people.  Gratitude for all that I had was what I was feeling. I was blessed with total peace in the hospital ward especially at nights for I believed that Jesus was with me. Never for one moment did I doubt His presence. Church gave me constant support through prayer.

I discovered how beautiful clouds were, how green lallang, plants and trees were. Even when there were cars honking loudly in the streets, I didn’t get upset. It just proved to me that people existed and there was life around me. I learnt how some friends are genuine and some are not. Until today, these feelings of appreciation and gratitude are still very much present in my life.

To see my hair falling off earlier was like watching a horror movie. But then, I looked at it positively, telling myself that at least, I would not need to pay for shampoo. I didn’t need to paint my nails any more – it was already painted black. My bald head was cool, I liked it. I started to write poems and songs, whenever I was free and took everything very positively.

For those going through this journey, know that there is no guarantee to how long we live. I was more than prepared to go if that was His will. I say, remain POSITIVE. I choose to be happy and alive.

At the end of 2017, I had a second attack of lymphoma. My son and nephew, thankfully, alerted me and got me to get the lump that was growing bigger under my chin checked.

Thankfully, this time around, medical advances meant chemotherapy was much improved and the horrors of it all didn’t affect me as much. I completed chemotherapy in early 2018 and I continue being positive. I wrote songs whilst the chemo drips were finding its way into my veins in the hospital. Whenever the specialist was doing his morning rounds with patients, he would find me writing busily, my tabletop full of papers. It confused the nurses and doctor but I thought, “Hey, life goes on”.  It does not stop at hearing that one has the Big C. We all have choices to make.

Make the choice to be positive, happy and love life.

This article was first published on my LinkedIn on 28 February 2019.
You can read my story – We Rise By Lifting Others. You can read other stories in this series.