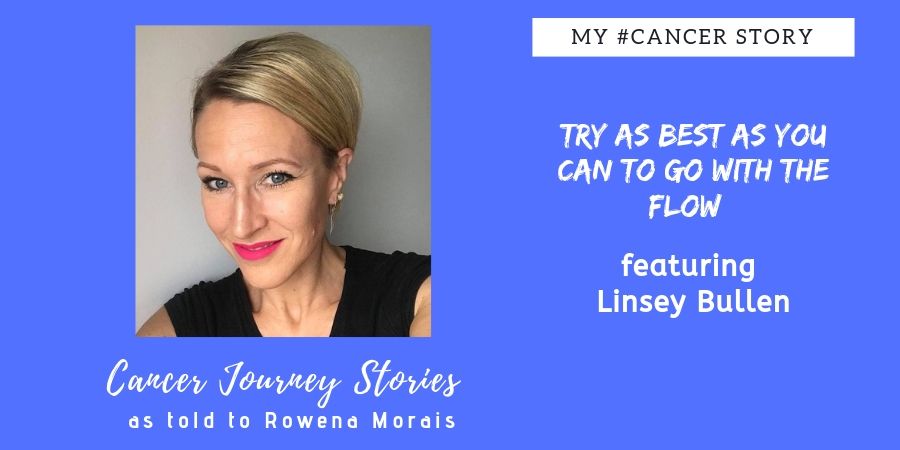 This is a series of #cancer stories I am writing to raise money for cancer research so that the vital work that needs to be done in cures and therapies may continue. In this series, I interview others who have or are still battling cancer in order to share their story, to empower and uplift. I have been raising money for cancer research since October 2018 specifically for Cancer Research Malaysia (CRM). All proceeds raised go directly to CRM – I take no part of the funds at all.  If you would like to share your story, donate any amount to CRM, help spread this message or want to find out more, please contact me at rowena @ rowenamorais dot com. Thank you very much for reading.

This is Linsey Bullen’s story.

I live in Leicester, United Kingdom.  I am 45 years old and have two sons, aged 5 and 7.  I am currently employed by NHS (National Health Service) England as a Communications and Engagement Manager but am going through the ill health retirement process so that I can focus full-time on my health and family.

Let me start at the beginning

I was first diagnosed with primary breast cancer in 1999 at the age of 25 and then again, in March 2018 with a recurrence in the same breast and a secondary tumour in my lung.  With the primary breast cancer, I had discovered a small lump under the areola of my left breast. So I went to the doctors.  I was always aware that any lump should be checked but I wasn’t particularly worried, as I knew it was very rare (at that time) for people my age to get breast cancer.  I was also distracted by last-minute wedding arrangements – I was due to get married two weeks later.

Fortunately, my doctor was very swift with the hospital referral and all my tests and results were available within two weeks – the week before my wedding!  When I saw the consultant, he told me the results were inconclusive and advised me to “go and get married, enjoy your honeymoon and come back after that and we’ll remove the lump anyway.”

So I had the lump removed and waited for my appointment, still not particularly worried as I felt confident it was nothing.

I’ve learned that cancer is totally unpredictable and I have no control over what happens in the future.  But I can re-evaluate my life and make adjustments to give me the best possible chance at life.

However, when I went back to see my consultant, he told me it was cancer.

The tumour was grade 3 and 0.5mm – it was very small but because it was fast growing, they booked me in very quickly to have further surgery so that they could remove a clear margin of tissue that had surrounded the tumour.  In those days, it was known as a segmental mastectomy but I’m told they call it something else now.

After recovery, I started a course of chemotherapy (six sessions over six months), followed by six weeks of radiotherapy.  I was then put on Tamoxifen and Zoladex injections for three years and followed up every six months (to start with) and annual mammograms.

What’s changed since then

In 2017, I had a routine mammogram and was asked to see the consultant as they’d found an abnormality in my left breast.  After a vacuum biopsy, they confirmed that the cancer had returned in my left breast but it was a recurrence.

I was told I would need a mastectomy of the left breast and an appointment was made for me to see a plastic surgeon to discuss my options.  In the meantime, they arranged for me to have a full body CT scan to rule out any further spread.

I don’t think, at this stage, anyone thought it had spread because it wasn’t the same type of cancer and it was early stage.  However, when I arrived for my appointment, I was met by my consultant who took me aside and told me that they had found a tumour in my right lung.

I was completely shocked but I stayed calm and we discussed next steps.

This meant the mastectomy was on hold until they dealt with the lung tumour and determined if it was a primary or secondary cancer.

I had surgery to remove the tumour, but unfortunately, after tests, they confirmed that I had a secondary cancer from the primary tumour diagnosed in 1999.  Fortunately, the surgeons were able to do a lung resection and remove it with a clear margin and I recovered well from the operation.

As my cancer is HER2 hormone receptive, I was put on a new drug called Ribocyclib, a chemotherapy drug taken three weeks on and one week off. This became available to patients in March 2018.  I will be on this drug for life or until it stops being effective and hopefully there will be another drug I can try.

I am also on Letrazole to suppress the pituitary gland, which also produces oestrogen, and until recently, a monthly Zoladex injection (which I no longer have due to recently having a full hysterectomy).  I’ve been on the medication for just over a year now, and apart from some side effects, I am tolerating it well.

At this stage, the mastectomy is on hold until further notice and it’s unclear if this will go ahead.  In the meantime, I am having regular scans and check-ups so I feel reassured that if anything should turn up elsewhere, they will be on it.

What’s remained the same for me? My strength and optimism and my ability to see positives in every situation rather than focus on the negatives.

What I’ve learned from this

I’ve learned that cancer is totally unpredictable and I have no control over what happens in the future.

But I can re-evaluate my life and make adjustments to give me the best possible chance at life. This is why I decided to apply for ill health retirement and leave my career behind to look after myself and my families’ health and well-being.

My advice on dealing with cancer

Try as best as you can to go with the flow of what’s happening.

I found waiting for hospital results the hardest part of my journey but tried to keep myself distracted by talking to friends and family or just going out for walks.  When I couldn’t do this, I focused on reading mindfulness books to keep me positive and focused.

I highly recommend ‘The Secret’ by Rhonda Bryne and ‘Your mind can heal your body’ by Matthew Manning.  Keeping affirmations at hand were also, and still are, a good way for me to stay positive.  My children also continue to love and need me and there is no way they are going to grow up in this world without me!

There isn’t anything I would change about my journey.

I have found spirituality on my journey and often find white feathers and signs that I have a guardian angel watching over me.  I feel safe and looked after.

Coping with my situation

I felt that I coped better the second time as I have a solid network of friends and family around me.

I have recently been invited to a ‘Living with Secondary Cancer’ event in May organised by my local Breast Cancer Care team, where I can meet others in similar situations.  They also run monthly groups which I can take advantage of, should I wish to.  Watch this space!

I sat down and thought about the good things in my life versus what caused the most stress.  Once I’d identified this and made fundamental changes (my husband no longer works away and I no longer have to balance family commitments around a demanding job), my whole outlook changed and it has been far easier to appreciate all that I have and embrace it.  The only way is up as they say!

Linsey Bullen started and finished her cancer journey between 1999 – 2000 and restarted it again in 2018 when she was diagnosed with secondary cancer.  When she’s not visiting the hospital or at the doctor’s surgery, she spends time with friends and family and enjoys walking most places now that she has the time.  Linsey also reads books that focus on positivity and proven coping strategies.  She has also recently found a renewed love of drawing and painting and will be focusing more on this in the future.

You can read my story – We Rise By Lifting Others. You can also read other stories in this series.