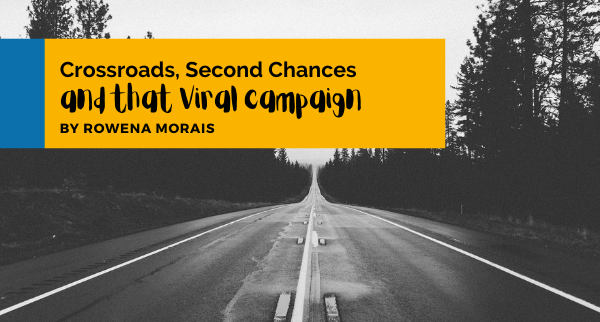 Careers are, often, not linear. We may think that a typical career path is one that stays on a particular trajectory, constantly moving upwards, making financial gains and improvements in status.  Does that mean that a non-linear career is one to frown upon?

It’s been said that a non-linear path is one that may start in one direction but moves to another. These changes or stops and starts can come about for various reasons such as a career break, dealing with illness, a redundancy, and perhaps, for many out there, changes wrought by the COVID-19 pandemic.

Last weekend, I ran a Thrive meetup for career women in which I had the honour of interviewing and chatting with Tania Singh about her career and also, her company.  Tania is the CEO and co-founder, with Ria Sharma, of Make Love Not Scars, a non-profit organisation that aims to rehabilitate survivors of acid attacks.

Let’s talk about flow and being open

Tania shared how she was working towards her business degree at the Singapore Management University in her early 20s when her life came to a standstill. She endured a horrific fire accident, and as her scars healed, she considered how she had almost died at the age of 23.

At the same time, a friend of hers, Ria, was studying in Leeds and busy raising funds for a burn victim. Tania offered to help and one thing led to another: she completed her degree and jumped on a flight back to New Delhi, where she was originally from. There, Tania decided to join her best friend to start Make Love Not Scars.

Doing this was, as Tania put it, about simply doing what needed to be done. She had no real plan about what else she was going to do, she didn’t look ahead too far to see what was around the corner.

Having been a burn victim herself gave her a unique insight into understanding what these burn victims were facing and she knew she needed to help and provide much needed support.

In India, acid attacks are predominantly gender-based crimes but it has been increasingly used as a weapon in India and across the world. Tania and Ria started out providing support for these acid attack survivors, many of whom are women and children. It all began out of their parents’ houses, where they were living at the time, where they faced some objection. But they pursued this course of action anyway.

Over time, they understood that monetary help was not enough. These burn victims needed a space to call their own, a safe space where they could recuperate.

That is why Make Love Not Scars operates India’s only rehabilitation centre  for acid attack survivors. They provide not only immediate life saving medical attention and reconstructive surgeries but legal aid and skill training in order to help survivors cope with the massive changes they face.

How bad is this situation in India?  Tania wrote an article on Breaking Barriers Despite Unimaginable Challenges: Non-Profit CEO Celebrates the Progress of Acid Attack Recovery Efforts for the Women’s Federation for World Peace USA. She shared that a love marriage with a man not suggested by a woman’s parents can have her killed and jealousy by a scorned lover can have her attacked with acid.

“In India, 80% of acid attacks are against women, and 90% of those victims are aged between 16-40, attacked by scorned lovers, husbands, in-laws, fathers, brothers, and uncles. Most of the survivors that Make Love Not Scars has rehabilitated have been attacked by the men in their own families for various reasons, including: daring to earn their own livelihoods, being unable to give birth to sons, and for apparently dishonouring their family members in ways we could never comprehend,” Tania explained.

You would think that faced with this, Tania may be pessimistic, or even, cynical. But she is bright and cheery, looking at outcomes, possibilities and goals. She is ambitious, proactive and displays clear thinking.

That’s why the Thrive online meetups have been going on, despite the fact that borders are now opening up and I can resume the face to face meetups I used to run pre-COVID-19. It has given me an unbelievable opportunity to connect with women around the world and bring women together for interactive sessions where we can discover more about each other and the work we do and why it matters.

Tania’s career path has zigged and zagged and she has plans for the future. But I was struck by two things regarding Tania. First, she is a leader. She evaluates the situation and takes action. She stands behind her vision and cause and brings others on board. It’s easy enough to talk about the issue at length and evaluate all the things that are wrong with the circumstances. But it takes courage and perseverance to take a stand like this and do what needs to be done.

Second, Tania’s willingness to stay present throughout. To be focused on the here and now and what needs to happen. Sometimes, this can be hard to do when you are very focused on your journey and have ideas about what that journey needs to look like.

The meetup that ran

Highlights from the session

A serious topic like this, with no easy answers, could easily derail a meetup of this nature, especially since many are meeting for the first time, and engaging in a new environment, completely online. But there is a sense of openness, vulnerability and willingness to participate, to listen, to engage and that makes the difference.

Thrive is a women-only private group founded by Rowena Morais. We empower career women by connecting those who are starting out professionally (and needing support) with the more established women (who can mentor and share ideas). Thrive focuses on helping women develop their profile, network and body of work. Thrive runs complimentary monthly meetups for career women.
#DigitalProfile #WomenThrive #CareerWomen #CareerJourney

One Reply to “Crossroads, Second Chances And That Viral Campaign”